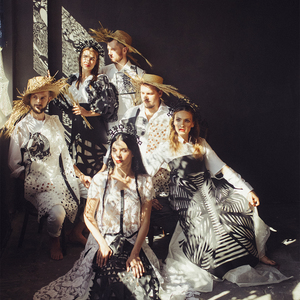 FROM THE CARPATHIAN MOUNTAINS, KURBASY TRACES CONTEMPORARY CONNECTIONS TO AN ARCHAIC PAST.

Lviv, the eons-old Carpathian hub, holds Ukraine’s cultural core. Around this nucleus, spheres of tradition and innovation spin, collide and reform. The idea of culture as a cosmic living organism is central to Kurbasy, whose folk-based multimedia ...

Conceived and directed by the band’s three actress-singers, Kurbasy’s sonic-theatrical explorations of Ukraine’s rich trove of calendar song cycles, lullabies, and legends, conjure the natural world, beliefs, and rituals, tracing contemporary connections to an archaic past.

Catalyzed by intense upheavals, Egyptian and Ukrainian performing artists are animating their nations’ public spheres. Now, some of the strongest performers and creative innovators from these countries are coming to the U.S., to share their perspectives and broaden ours.

For its fourth edition, Center Stage – a  cultural exchange program initiated by the U.S. Department of State’s Bureau of Educational and Cultural Affairs and produced by the New England Foundation for the Arts (NEFA) – will bring five contemporary music and theater ensembles from Egypt and Ukraine to tour in the United States in September-November 2018. During independent month-long tours Dina Elwedidi (Egypt), Kurbasy (Ukraine), Mohamed Abozekry and Karkadé (Egypt), Teatr-Pralnia with CCA Dakh (Ukraine), and Youssra El Hawary (Egypt) will present more than 50 performances and hundreds of residency activities, classroom visits, workshops, artist-to-artist exchange, and community gatherings. (Individual tour overviews below.)

The 2018 Center Stage ensembles will visit and engage with people in 16 states and the District of Columbia. The artists will perform in a wide range of locations and venues, from large cities to small towns. Venues will include major performing arts centers such as the Kennedy Center in Washington, DC as well as universities, cultural and community centers, festivals, contemporary art venues, music clubs, and artist-run spaces. The program will bring one independent journalist from both Egypt and Ukraine to travel to the United States to report on the tours. Tour details and experiences will also be featured on the Center Stage website (www.centersageUS.org) and through U.S. Department of State social media.

“Ensembles travel to the U.S. from around the world and enhance the cultural vibrancy of our nation, while promoting economic opportunities in American communities,” said Cathy Edwards, Executive Director of the New England Foundation for the Arts. “Arts delegations cultivate the mutual respect and appreciation that is the essence of cultural diplomacy”.

Center Stage was launched by the Department of State to bring international performing artists from select countries to the United States for professional growth and touring, supporting foreign policy, deepening our relationships with foreign publics, and strengthening the U.S. creative economy. The visiting artists learn from their U.S. tours and share their experiences in their home communities, where they serve as role models and opinion leaders. To date, 24 ensembles from seven nations have toured the United States through Center Stage, reaching tens of thousands of Americans directly and millions of international fans through media and social media.

Audiences and the presenters who serve them are looking to directly connect with creative people from other parts of the world. Center Stage, by mitigating financial risk and managing the complexities of international exchange, has ensured high-caliber international artists and audiences meet.

“Center Stage encourages presenters to take chances. We should be able to welcome artists from all over our country and the world; however, international travel expenses, and the logistics of visas, taxes, and communication make it difficult for artists from abroad to reach smaller, more remote markets,” says presenter Brian Jose, who programmed Center Stage artists at the College of St. Benedict and St. John’s University in Minnesota and will host Teatr-Pralnia with CCA Dakh at the University of Florida, Gainesville this year. “The artists don’t just play a single concert. They get off the stage and out into the community. I still hear about how the band Khumariyaan from Pakistan went fishing with their new American fans in Minnesota. These experiences make the world smaller.”

Center Stage is among the most successful programs to bring contemporary international artists into direct contact with people across a wide range of American communities. Through performances, workshops, discussions, classroom visits, artist-to-artist exchanges, and community gatherings, Center Stage ensembles engage with audiences onstage, offstage and online, sharing their work with audiences in the United States, and friends and fans at home.

The program also impacts the lives and professions of the visiting artists. "Center Stage is a program aimed at cultural exchange, but for our band, it also tapped into something much deeper,” says Center Stage Season 2 artist Sparlay Rawail, of Pakistan’s Khumariyaan. “We learned what being working musicians is all about and how to communicate. We now have a deeper sense of our own culture through the eyes and ears of others -- from the outside in. But above all, this tour opened our minds as human beings and made our art that much more sincere."

“Increased cultural awareness is especially important in today's world,” notes John Chicherio of the Huntington (NY) Arts Council, which hosted Center Stage ensembles in 2012 and 2016.  “Center Stage enhances our reputation as an adventurous program and serves all of us nationally with diverse, high-quality artistic experiences.”

“Keep this program going!  It's making a huge difference in our rural community,” exclaims Kathryn Maguet, Executive Director of the Weis Center for the Performing Arts at Bucknell University in Lewisburg, PA, which has partnered with Center Stage since the first season and will host Mohamed Abozekry & Karkadé and Youssra El Hawary later this year.

THE ARTISTS OF CENTER STAGE SEASON 4

By the end of 2018, 29 performing arts ensembles from nine nations -- Algeria, Egypt, Haiti, Indonesia, Morocco, Pakistan, Tanzania, Ukraine, and Vietnam -- will have toured from coast to coast as part of Center Stage. 20 of these ensembles will have made their U.S. debuts with the program.

Center Stage is a public diplomacy initiative of the U.S. Department of State's Bureau of Educational and Cultural Affairs, administered by the New England Foundation for the Arts in cooperation with the U.S. Regional Arts Organizations, with support from the Doris Duke Foundation for Islamic Art, and the Trust for Mutual Understanding. General management is provided by Lisa Booth Management, Inc.

For press inquiries about the Center Stage 2018 tours and artists, contact Ben Michaels,

For press inquiries on the Center Stage initiative, contact ECA-Press@state.gov.